This page lists possible conventions for Hex games. These conventions concern the color of the players, who goes first, the orientation of the board, and the numbering of the positions on the board. Unlike much older games such as Chess and Go, there are no universally agreed upon conventions for Hex, and different people, game sites, books, and computer programs sometimes use different conventions.

There are several aspects of a game of Hex that are arbitrary and do not affect game play in an essential way. This includes the orientation (rotation and reflection) of the board, the colors of the players, who goes first, which edge belongs to which player, and whether and how the cells on the board are numbered.

In the case of established games such as Chess and Go, there are universal conventions that all players have agreed on. This has certain advantages. For example, every chess player understands what it means to move a white pawn from d2 to d4, without requiring further explanation.

Cells are arranged in a grid, with each cell named by a letter and a number. Letters can be uppercase or lowercase. The following convention seems to be nearly universally used: 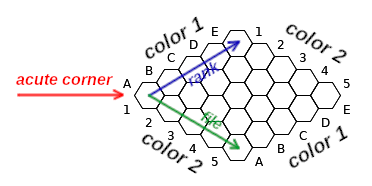 In particular, this means that the three cells A1, B1, and A2 are all adjacent to each other.

I am not aware of anybody who has used the opposite convention. However, there are some authors who use no edge coloring convention at all.

There are two different ways of implementing the swap rule. Which convention is chosen will affect the notation for games. It is also possible to permit both methods of swapping; then it is up to the player to decide which method to use.

Here is an example using the swap sides convention: Player 1 plays a black piece at g4. Player 2 swaps sides. The board state remains unchanged, and immediately after the swap, it is player 1's turn to play a white piece.

Note that the above logical conventions are purely symbolic. They do not depend on any particular board layout.

Although passing (skipping a move) is not always considered part of the classic Hex rules, allowing it does not change the nature of the game and has certain advantages. See the page on passing for more details.

The most common color schemes are:

The positive sense can also be described by saying that if the board is rotated so that A1 points west, then the ranks run from southwest to northeast, and the files run from northwest to southeast. This convention can also be described as "letters above numbers", because if A1 points left, the letters A,B,C marking the files appear above the numbers 1,2,3 marking the ranks.

There is probably no need for a preferred board rotation; indeed, players using a physical game board may freely move around the board and look at it from any angle they want.

In computer hex, the most common board rotations are:

The following table illustrates some common board layouts. Here, color 1 is shown as black and color 2 is shown as white.