Difference between revisions of "Piet Hein" 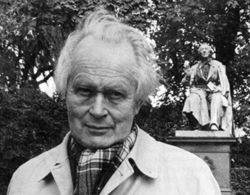 Piet Hein (1905-1996) was a Danish poet and mathematician, and the first inventor of the game of Hex.

In Denmark, and in the rest of Scandinavia, he is most famous for his collections of short poems, which he called grooks. He is also known as the inventor of the Soma cube.

Most of the "grooks" are written in Danish, but some he himself translated into English. The following is an example of these poems, which ought to be taken to heart by all Hex players.